Barbecue at Home, where pit masters are born, presents to you: the Smoked Bologna Sandwich Recipe. Anytime we introduce a new smoked recipe, we hope you feel ecstatic just as much as we do. We’ve improved upon the quintessential American sandwich and we hope you’ll love it. Season a whole bologna chub using mustard and Dickey’s Chili Pork Butt Seasoning for an amazingly balanced flavor. Put a half-inch slice between two slices of Texas Toast, add your accoutrements of choice, and chow down until sundown!

This smoked bologna recipe calls only for a couple of common food items that you already have in your pantry. The steps to create this smoked bologna recipe is also very, very simple. We will need 1 Loaf of Texas Toast, 1 Head of Iceberg Lettuce, 3 Ripe Beefsteak Tomatoes, condiments of your choosing, and of course, the 4-5 lbs. of the luncheon meat/bologna. As for the bologna it is your choice what you want to use.

Since Bologna is our primary focus today let us enlighten you on a bit of its history. Bologna sausage, also spelled Baloney, was named after the city of Bologna in Italy. The sausage is like Mortadella sausage of Italy, or ground heat-cured pork of Italy.

Here’s how to bring your bologna to the next level: Score the bologna chub with crisscross patterns (with a filet knife if possible). It should look like 1” spaced checkerboard. Once that is done, rub the yellow mustard onto the bologna chub evenly before the Dickey’s Chili Pork Butt Rub. The mustard helps keep the rub on the bologna for seasoning, so it is important to cover the bologna chub before the rub. Next, place it in the smoker.

How long to smoke the bologna? Smoke it for 3-4 hours. While you wait on the smoked bologna, you could be making the ultimate Bourbon Mustard. You will seek out this Bourbon Mustard Recipe time and time again because it enriches so many different BBQ recipes from Barbecue at Home. Any BBQ pork meats or vegetables will taste phenomenal with this sauce, more than it already has by itself.

Add this recipe to Yummly 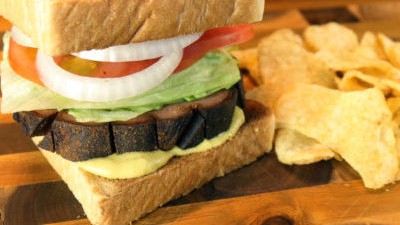