Here at Barbecue at Home we will show you a revamped, 3-indgredient ham glaze recipe. Typically, a 3-ingredient glazed ham recipe uses brown sugar, honey, and ham but here we will add the following ingredients for a more distinguish brown sugar glaze for ham: dry white wine, apple cider vinegar, Dickey's Caribbean Chipotle Barbecue Rub, and Dickey's Jalapeno Rosemary Steak Seasoning. This amazing recipe is perfect for many occasions or seasons like Easter, Thanksgiving, and Christmas. It also makes a great presentation on the dinner table. Have a taste of smokey, sweet, yet crispy brown sugar glazed bone in ham by following this honey glazed ham recipe.

Today’s main ingredient is, you guessed it, pit ham (not to be confused with the same kind of “pit” referring to barbecue pit). The “pit” in ham stands for partially, internally trimmed ham or ham that has the bone and fat removed then put together and smoked. In doing so, pit ham is easy to carve and cut for sharing without all the hassle of fighting with the meat. This gives it a much nicer presentation on your plate as well.

We will be “double smoking” the ham to heat it up while we apply our honey-brown sugar glaze. Set the smoke grill to 250 degrees Fahrenheit. Next, combine all the listed ingredients besides the ham in a saucepan to make the honey glaze to top it. Then baste the ham using 1/3 of the honey glaze.

How long to smoke a ham? You want to smoke the honey glazed ham for approximately 1.5 hours until its internal temperature is 140 degrees. While the ham is in the smoke grill, use the glaze for ham and brush it every 10-15 minutes with the remaining 2/3 glaze. For the last 45 minutes remaining, crumble brown sugar over the top, forming a crust on top that has a sweet and savory crisp. The heat in the smoker grill will melt the sugar glaze as it drops down and around the pit ham.

Cover the smoked honey glazed ham in foil when it reaches 140 degrees. Then leave the Ham out to rest for 15-30 minutes before serving. Next, Bone Appetite! Carve and enjoy your delicious honey glazed ham!

Pro Tip: Smoke pit ham can last up to 7 days. Any leftover glazed pit ham could be refrigerated for a mean ham and cheese sandwich. 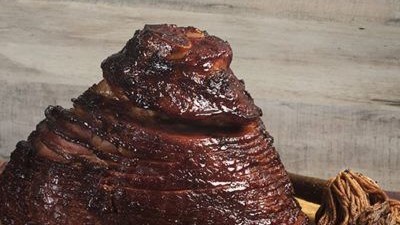